A First Look at the Kalman Filter

18. A First Look at the Kalman Filter¶

In addition to what’s in Anaconda, this lecture will need the following libraries:

This lecture provides a simple and intuitive introduction to the Kalman filter, for those who either

For additional (more advanced) reading on the Kalman filter, see

The second reference presents a comprehensive treatment of the Kalman filter.

The Kalman filter has many applications in economics, but for now let’s pretend that we are rocket scientists.

A missile has been launched from country Y and our mission is to track it.

Let \(x \in \mathbb{R}^2\) denote the current location of the missile—a pair indicating latitude-longitude coordinates on a map.

At the present moment in time, the precise location \(x\) is unknown, but we do have some beliefs about \(x\).

The density \(p\) is called our prior for the random variable \(x\).

To keep things tractable in our example, we assume that our prior is Gaussian.

In particular, we take

This density \(p(x)\) is shown below as a contour map, with the center of the red ellipse being equal to \(\hat x\).

We are now presented with some good news and some bad news.

The bad news is that our sensors are imprecise.

In particular, we should interpret the output of our sensor not as \(y=x\), but rather as

How then should we combine our prior \(p(x) = N(\hat x, \Sigma)\) and this new information \(y\) to improve our understanding of the location of the missile?

Because we are in a linear and Gaussian framework, the updated density can be computed by calculating population linear regressions.

In particular, the solution is known 1 to be

The original density is left in as contour lines for comparison

Our new density twists the prior \(p(x)\) in a direction determined by the new information \(y - G \hat x\).

What have we achieved so far?

We have obtained probabilities for the current location of the state (missile) given prior and current information.

This is called “filtering” rather than forecasting because we are filtering out noise rather than looking into the future.

But now let’s suppose that we are given another task: to predict the location of the missile after one unit of time (whatever that may be) has elapsed.

To do this we need a model of how the state evolves.

Let’s suppose that we have one, and that it’s linear and Gaussian. In particular,

Our aim is to combine this law of motion and our current distribution \(p(x \,|\, y) = N(\hat x^F, \Sigma^F)\) to come up with a new predictive distribution for the location in one unit of time.

Since linear combinations of Gaussians are Gaussian, \(A x^F + w\) is Gaussian.

Elementary calculations and the expressions in (18.4) tell us that

Using this notation, we can summarize our results as follows.

The predictive distribution is the new density shown in the following figure, where the update has used parameters.

Let’s look back at what we’ve done.

We started the current period with a prior \(p(x)\) for the location \(x\) of the missile.

If we now step into the next period, we are ready to go round again, taking \(p_{new}(x)\) as the current prior.

These are the standard dynamic equations for the Kalman filter (see, for example, [LS18], page 58).

Apart from special cases, this uncertainty will never be fully resolved, regardless of how much time elapses.

However, it is certainly possible that \(\Sigma_t\) converges to a constant matrix as \(t \to \infty\).

To study this topic, let’s expand the second equation in (18.7):

This is a nonlinear difference equation in \(\Sigma_t\).

Equation (18.8) is known as a discrete-time Riccati difference equation.

Equation (18.9) is known as a discrete-time algebraic Riccati equation.

Conditions under which a fixed point exists and the sequence \(\{\Sigma_t\}\) converges to it are discussed in [AHMS96] and [AM05], chapter 4.

(This strong condition assures that the unconditional distribution of \(x_t\) converges as \(t \rightarrow + \infty\).)

The class Kalman from the QuantEcon.py package implements the Kalman filter

The latter represents a linear state space model of the form

To connect this with the notation of this lecture we set

You can view the program on GitHub.

Consider the following simple application of the Kalman filter, loosely based on [LS18], section 2.9.2.

The task of this exercise to simulate the model and, using the code from kalman.py, plot the first five predictive densities \(p_t(x) = N(\hat x_t, \Sigma_t)\).

Your figure should – modulo randomness – look something like this 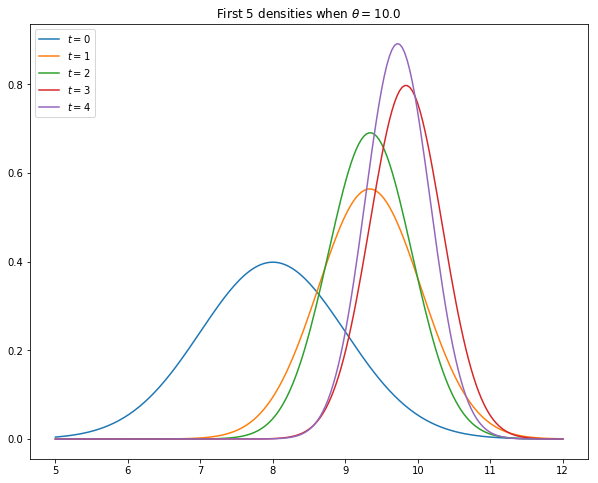 The preceding figure gives some support to the idea that probability mass converges to \(\theta\).

To get a better idea, choose a small \(\epsilon > 0\) and calculate

Your figure should show error erratically declining something like this 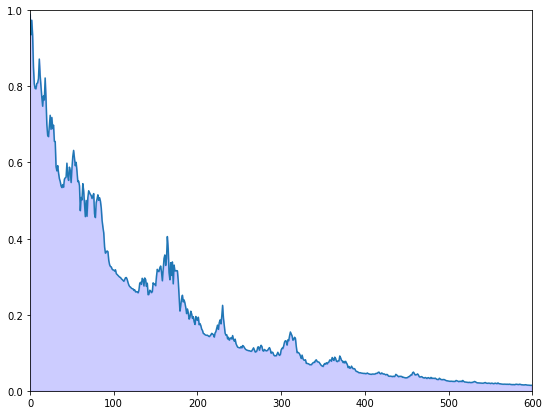 Let’s now compare the prediction \(\hat x_t\) made by the Kalman filter against a competitor who is allowed to observe \(x_{t-1}\).

The conditional expectation is known to be the optimal prediction method in terms of minimizing mean squared error.

Thus we are comparing the Kalman filter against a competitor who has more information (in the sense of being able to observe the latent state) and behaves optimally in terms of minimizing squared error.

Our horse race will be assessed in terms of squared error.

To initialize the prior density, set 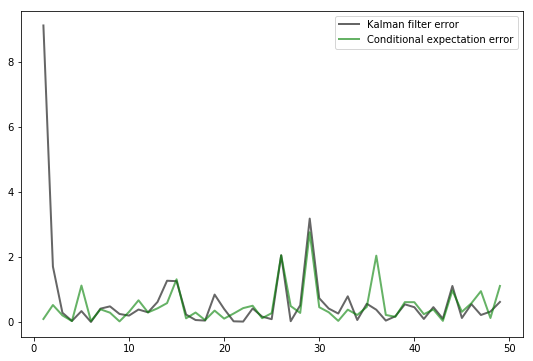 Observe how, after an initial learning period, the Kalman filter performs quite well, even relative to the competitor who predicts optimally with knowledge of the latent state.

Observe how the diagonal values in the stationary solution \(\Sigma\) (see (18.9)) increase and decrease in line with this coefficient.

The interpretation is that more randomness in the law of motion for \(x_t\) causes more (permanent) uncertainty in prediction.

See, for example, page 93 of [Bis06]. To get from his expressions to the ones used above, you will also need to apply the Woodbury matrix identity.